Ralph Cole cured his cancer with carrot juice in 2006 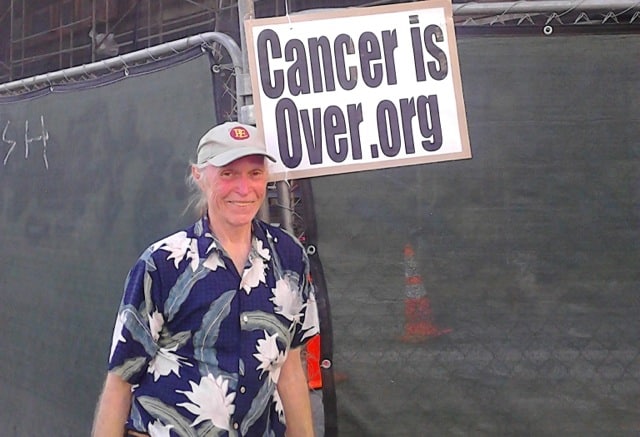 My name is Ralph Cole.
In 2005 I had metastasized cancer tumors, primarily in my neck, and was told I needed surgery, radiation, and chemotherapy. Before my surgery I was advised to juice carrots by the wife of a friend, a woman that had cured herself of ovarian cancer. Not knowing how much juice to drink, I started juicing three pounds of carrots a day, which yields about 3 cups, or a cup of juice per pound.

Four months later when I was due for surgery, I was told by a radiologist that an MRI showed that my tumors had not grown since my first MRI four months before. He also said that my tumors “may have even gotten smaller.” Despite this, he still insisted that without treatment my likelihood of surviving was about three times better with cancer treatment than without it (30% versus 10%). Because I was about to lose my eligibility for Medi-Cal, I asked him if I could skip the surgery and just get chemotherapy and radiation. He went to the hospital medical board on my behalf and won out over the surgeon that believed I absolutely needed to have surgery. I was allowed to have chemo and radiation without surgery. I continued to juice three pounds of carrots per day.

After chemo and radiation, the lumps on my neck were still there. My tumors gradually shrank and disappeared about four months after the two months of chemo and radiation. I stopped juicing shortly thereafter, not sure at the time whether it was the chemo and radiation treatment or the carrot juice that was responsible for my apparent cure.

Shortly after I stopped juicing, tiny lumps began appearing one at a time in two rows on my chest. When I started juicing again, no more new lumps appeared, and the ten little lumps I had on my chest stopped growing. I continued juicing while I looked for a way to get rid of them, not realizing at that time that carrot juice alone could do it if I drank enough of it.

Part of my reason for underestimating carrot juice was that I was out of touch with the woman that originally advised me to ask her how much I needed to be drinking, but also, I wanted to see if anything else could control the growth of my chest lumps besides carrot juice.

After failing to find anything else that seemed to have any effect, I asked a nurse that attends my church if she had any advice. Her advice was to go back to the hospital ASAP before my lumps metastasized further. Having been through the extreme discomforts of daily radiation treatments with chemo drips and shots, as well as having damaged my ability to swallow and salivate, I decided it was time to get serious about getting rid of the lumps, and I immediately increased my juicing from the three pounds of carrots I had been juicing each day, to juicing five pounds of carrots (yielding five cups of juice), every morning.

My visible chest lumps began to shrink almost immediately. I kept up the five pounds of juice (yielding five cups) daily, and the tumors shrank continuously over the next two months, finally disappearing. I juiced for another month or so, then stopped. The biggest lump, which had appeared first, was also the last to disappear, implying that larger tumors probably take longer to to get rid of than smaller ones.

I like the Juiceman II Juicer because it takes large carrots without slicing.

I have been cancer-free ever since, and have only juiced on occasion since then. That was in 2006, seven years ago. I put my story in an email a few months later, which someone posted to a website on the internet where a trickle of people have been able to find it over the years.

Almost every time I mention juicing carrots to people, they tell me about some cure they have heard about. When I had cancer I tried many different dietary cures, as well as 18 different types of pills, and external heat applications. This might be why it took so long to discover that although 3 cups per day of carrot juice was simply not enough to shrink a tumor, 5 cups per day was.

If you get anything from this blog, I hope that it is that I could not find anything else besides carrot juice that shrank tumors, and even then, 3 cups per day was not enough. If you go to a Gerson Clinic, they will encourage you to drink carrot juice 13 times a day. Don’t make the mistake I made and compromise on the quantity. Five cups per day, every day, really, really, really works. More per day may work even faster. I can’t say, because I didn’t try. I didn’t need to.

Three cups per day will likely stop the growth of a tumor, but it probably won’t shrink a tumor noticeably, based on my experience. And it is enough to turn your skin slightly orange. If you don’t like carrot juice, 3 cups per day will probably stop your tumor’s growth while you experiment with other things to see if they work. But despite all the other things that came recommended,  I couldn’t find anything else that worked.

Five cups a day is not so terrible, and you may even like it. I found that drinking it through a straw helped it go down quicker and easier. Less might reduce tumors for you, but it took five cups a day to shrink my lumps, and I’m about average size. At the time was about 160 pounds.

It remains to be determined whether every cancer, or every individual’s metabolism, responds to carrot juice. But until actually researched, it remains a possibility. I have yet to meet a person that juiced carrots for cancer and was unhappy with the result. I know of three people, myself and two others, that juiced 5 pounds per day. Each of us had our tumors shrink. That’s not a lot to draw on. But if the hospital gave me a 30% chance of surviving 5 years or more even with their treatment, then that means they must be failing to cure 2 out of 3 of their patients with the symptoms I had. And both of the women I am talking about had much more advanced cancers than I had.

With so much evidence that millions of lives are being unnecessarily lost through ineffective mainstream cancer treatments, we must share this information. In the terminology used so often to justify potentially lucrative therapies shown to be effective, to delay would be unconscionable.

Much as the earlier practice of bloodletting was eventually ended, the world is gradually becoming aware that other medical practices have gradually filled in the void created by the citizenry’s gullibility regarding anything mainstream medicine offers it. It is time to clean house again. We can start by making people aware of the issue before they fall prey to the medical establishment.

The wealthy and famous are particularly susceptible to this situation. The “best treatment” is automatically assumed to be the most expensive one, and that makes medical shopping easy for those that can afford to pay a lot. But when people pick their treatment on the basis of cost, the treatment that costs the most will never be driven out, regardless of how ineffective it is. The need for change from the grass roots up is nowhere truer than when it comes to mainstream medical practices.

I hope you will investigate for yourself the curative power of carrot juice wherever and whenever the opportunity presents itself. And I should also mention that drinking carrot juice has many other health benefits, intestinal cleansing (it cured both my acne and pre-cancerous scales I used to get), and other sites on the net report that a carrot a day reduces the risk of cancer. One article claims that eating one carrot every day reduces the risk of cancer by 60%.

If you ever have an opportunity to observe the growth of a cancer in your own body either visually or through body scans, try carrot juice first; once you determine that it can control your cancer, you can experiment with other things to see if they work too, knowing that you can go back to carrot juice. This is the kind of research that is needed, and your experience will be of value to others.

If you are a skeptic, I share your skepticism. I was very skeptical of everything before carrot juice proved itself to me. But people that are skeptical about non-mainstream cures tend instead to place their confidence in professionals with huge educational debts that get paid for the medical services they provide, whether they are effective or not; certainly not upon whether their patient recovers.

If you doubt anything I have said, find someone with cancer and juice for them, and find out for yourself what happens. You can also get in touch with me. But regardless of whether you can reach me, or even what happens to me, you can trust in my experience with carrot juice as if it was your own. At the risk of sounding overly dramatic, I will consciously avoid the greater risk of being overly cautious, by stating what I believe in my soul to be true: millions of lives are at stake. I hope you will join me in making this cause your own.

I can be reached through my blog CancerIsOver.org

I juiced carrots to beat cancer and turned orange