Shocking facts about Susan G. Komen for the Cure

Pinktober is fast approaching and this year I’m launching a preemptive strike to combat the tidal wave of pinkwashing propaganda that’s coming in a few weeks. I’ve assembled some of the most shocking facts about Susan G. Komen for the Cure — the world’s largest “breast cancer awareness” charity organization.

–Only 21% of money that Susan G. Komen for the Cure raises goes to cancer research “for the cure”. Simple math tells us that 79% of the money they raise isn’t going to anything that could produce a cure. As if that wasn’t bad enough, donating to cancer research is essentially giving free money to drug companies who make billions in profit every year, and don’t need your money, and are only interested in research that can lead to patentable, highly profitable drugs that they can sell back to you. For more on this, watch my 500k view rant Why I Don’t Race for the Cure.

-Susan G. Komen for the Cure has taken legal action against over 100 small non-profits for using the phrase “for the cure” in their fund-raising campaigns. How dare you sell ‘cupcakes for the cure’. Sue that little girl!

-In 2010, Susan G. Komen for the Cure partnered with KFC who sold pink buckets of chicken “for the cure”. Apparently the folks at Komen don’t know that fast food consumption is directly linked to obesity, and that obesity is the 2nd leading cause of cancer.

-In 2011, Susan G. Komen for the Cure created and sold a perfume called “Promise Me” containing potentially cancer-causing toxic ingredients coumarin, oxybenzone, and toluene. After this news broke, they pulled it from the market.

-In 2012, Komen drew criticism from the medical community for using misleading statements and deceptive statistics in their ads promoting mammograms. Komen uses donation money to provide mammograms to women who can’t afford them, which seems good, until you learn that a 25-year study of 90,000 women proved that mammograms don’t save lives, and that what early detection campaigns are actually doing is overdiagnosing and funneling women into an industry of harmful overtreatment, resulting in unnecessary surgery, chemo, radiotherapy and hormone therapies.

-In 2013, Susan G. Komen for the Cure partnered with Real Water to sell pink water bottles, even though disposable plastic water bottles contain BPA, which is linked to breast cancer tumor growth.

-In 2014, Komen partnered with Baker Hughes who produced 1,000 pink drill bits to be used in their fracking operations with the cutesy slogan “Doing their bit for the cure”. Fracking involves the use of 700 different chemicals, some of which, like benzene and formaldehyde, are linked to cancer.

-As a result of some of the shenanigans above, in 2014, Charity Navigator downgraded Susan G. Komen for the Cure to 2 stars (out of 4). Since that public embarrassment, Komen has been working to improve their rating. Nancy Brinker stepped down and was replaced with a much lower paid CEO. Their overall rating has come back up to 3 stars, but their financial rating is still 2 stars as of June 2016.

-Another organization that Susan G. Komen for the Cure funnels money to that has nothing to do with curing cancer is Planned Parenthood, which was founded by racist, eugenicist, sterilization proponent Margaret Sanger (google her) and is the single largest provider of abortions in the United States. Multiple peer-reviewed studies (ignored by the media and the medical industry) suggest that abortions significantly increase a woman’s risk of breast cancer.

In 2012, under the leadership of senior vice president of public policy Karen Handel, Komen’s board made the announcement that they had voted to stop funding Planned Parenthood because PP was under investigation by the federal government. But after a backlash from abortion supporters, Komen reversed their position. Karen Handel then resigned and authored a book about the whole affair entitled Planned Bullyhood: The Truth Behind the Headlines About the Planned Parenthood Funding Battle with Susan G. Komen for the Cure.

So those are the reasons I have taken a firm position against donating to Susan G Komen for the Cure. I’m certainly not one to advocate dwelling on negativity, but we need to be aware of what’s happening around us. If Komen changes their ways, my opinion of them could change as well. Moving on…

The BEST way to help cancer patients is not by donating to “cancer research”.

And that’s what prompted the creation of the Pink Ribbon SCAM shirt, designed by yours truly, to raise awareness about the bad behavior of Komen AND to raise money for cancer patients. Proudly display your disdain for Susan G. Komen for the Cure and Pinkwashing, and help spread the idea that we should “Give to patients not to Komen” (which is what the shirt says). 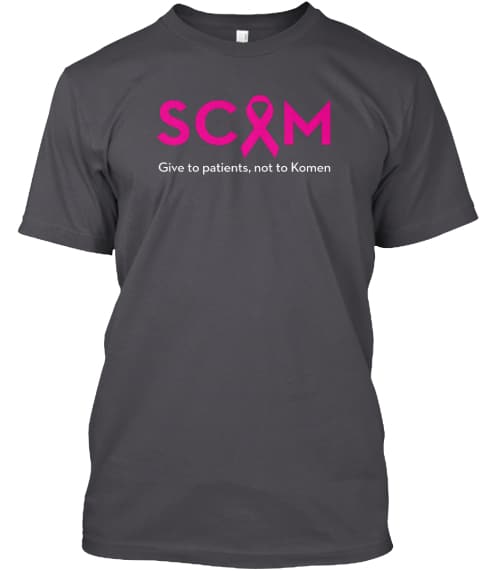 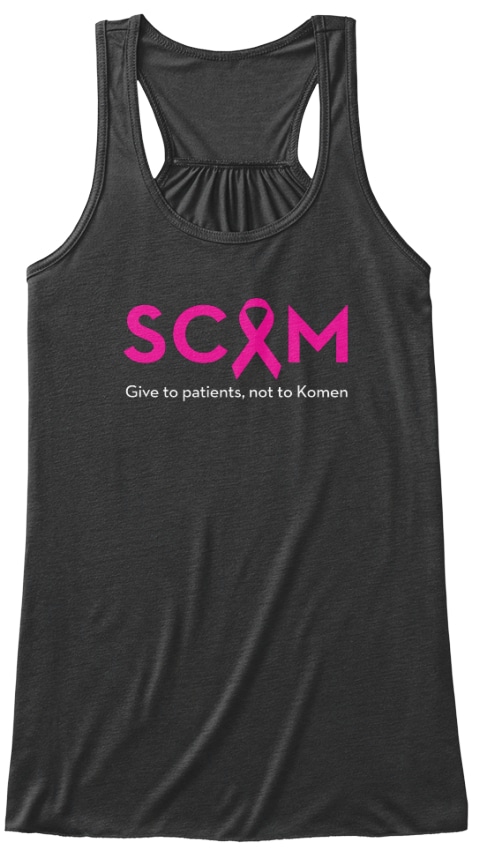 LIMITED RUN:
These shirts are only available until September 12th, 2016!
They should arrive approximately 7 business days later, just in time for Pinktober.

100% OF THE PROCEEDS GO DIRECTLY TO CANCER PATIENTS
I make zero dollars and I will even be paying for my own shirt. Everyone who purchases a shirt will be able to nominate someone for donation consideration. I’ll send the shirt buyers a special email with nomination instructions after the t-shirt campaign has ended.

This campaign has ended. The shirt is no longer available… But it will return in 2017!

Campaign Update – November 29, 2016
We sold 539 shirts and and raised $6438!
And after surveying the shirt buyers, I decided to give 13 cancer patients $500 each!
The winners were announced live on my facebook page.