So. There’s a new study comparing the effectiveness of curcumin to chemo drug 5-FU, on colorectal cancer cells.

Repeat. One of the most commonly used chemo drugs is 60 years old.

Additionally, the researchers examined the impact of the treatments on cancer stem cell markers. Cancer stem cells are responsible for developing resistance to chemotherapy and the recurrence of cancer after treatment.

The study used a 3D tumor culture, which more closely replicates how tumors act in the body than other conventional in vitro cell culture models. The culture was treated with either 5‑Fluorouracil (5-FU), which is a common chemotherapeutic agent used for colorectal cancer, BCM-95 Curcumin, or a combination of 5-FU and BCM-95 Curcumin.

One startling finding of this study was that treatment with 5-FU actually promoted the growth of cancer stem cells.

According to Ajay Goel, Ph.D., one of the study’s authors,”Colorectal cancer is especially devastating because of its high recurrence rate. Cancer stem cells exist in very small numbers in a tumor and can hide from chemotherapy… They survive (treatment) and cause cancer to reoccur, sometimes years later. I believe cancer stem cells are the main reason why we can’t stop cancer.”

“Our recent studies on curcumin continue to reveal its unique potential as a therapeutic strategy in the fight against cancer,” continued Dr. Goel. “In this study, treatment with curcumin impeded cancer growth and proliferation by inhibiting signaling proteins and blocking tumor cell promotion. The beauty of curcumin is its ability to balance gene expression and positively influence anticancer pathways.”

Translation: Curcumin slows down and/or stops colon cancer growth and spread. It turns on cancer preventing genes and turns off cancer promoting genes. Friends, this is straight from a very influential and well respected cancer researcher. See his bio at the end of the post. 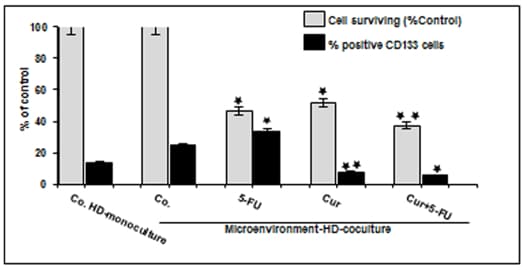 Friends, this graph perfectly demonstrates what is happening in the bodies of thousands of cancer patients. Chemo treatments will shrink the size of a tumor by 50% or more, and this is celebrated as a terrific progress. But meanwhile, the cancer stem cells (the real troublemakers) are multiplying. And soon after chemotherapy treatment is finished, more aggressive chemo-resistant tumors form in new parts of the body.

In this study, cancer growth was inhibited most when the curcumin was used as a pretreatment before chemotherapy. The addition of curcumin sensitized the cancer stem cells to chemotherapy treatment and reduced the amount of 5‑FU needed to inhibit cancer cell growth, but as you can see in the graph, the reduction in cancer stem cells by 5-FU with curcumin was only slightly better (a few percentage points more) than curcumin alone.

And remember, 5-FU was also found to make cancer stem cells more aggressive, which means the remaining 5-FU treated cancer stem cells could become a much more serious problem down the road when compared to the Curcumin treated stem cells.

It is important to note that the form of curcumin used in the study, BCM-95 Curcumin, has unique specifications, including high absorption and inclusion of turmeric essential oil, which is not found in standard curcumin. Therefore, these specific results may not apply to other forms of curcumin.

For those who want to take preventive measures, Dr. Goel recommends 500 milligrams to 1 gram of BCM-95 Curcumin and 250 to 500 milligrams of BosPure Boswelia (Frankincense) daily.

If you have cancer, he suggests doubling or tripling the dose. “It’s very safe,” he says. “Although I would advise patients to consult with their doctor, these botanicals are extremely safe.

The author of this study is Ajay Goel, Ph.D., Director of Epigenetics and Cancer Prevention at Baylor University Medical Center in Dallas, TX. He has spent more than 20 years researching cancer and has been the lead author or contributor to over 150 scientific articles published in peer reviewed international journals and several book chapters. He is currently researching the prevention of gastrointestinal cancers using integrative and alternative approaches, including botanical products. Two of the primary botanicals he is investigating are curcumin (from turmeric) and boswellia.

Dr. Goel is also a member of the American Association for Cancer Research and the American Gastroenterology Association and is on the international editorial boards of Gastroenterology, Clinical Cancer Research, PLoS One, Digestive Diseases and Sciences andWorld Journal of Gastrointestinal Oncology. He also performs peer-reviewing activities for almost 75 scientific journals, as well as serves on various grant funding committees of the National Institutes of Health. (He’s legit.)