In 1975, Cambodia was a terrifying place to live. The Communist Party of Kampuchea, aka the Khmer Rouge, lead by Pol Pot and backed by the North Vietnamese, took power by force and evacuated all the cities in an attempt to convert Cambodia to an agrarian society, forcing everyone to work in farm labor camps.

All industry stopped. Books were burned and religion was outlawed. Artists, musicians, teachers, business owners, anyone who questioned the new government, and everyone with an education was murdered, including people who wore glasses, because they looked smart. Really.

During the 4 year reign of the Khmer Rouge, it is estimated that between 1.4 million and 3 million Cambodians died either by execution in the Killing Fields, or in a former school turned prison called S-21, or from starvation and disease.

In 1979, the Khmer Rouge was driven out by the Vietnamese who established the People’s Republic of Kampuchea, essentially a socialist puppet state of Vietnam. In 1992, the UN stepped in. In 1993, the monarchy was restored, a parliament was elected, and the name was changed to the Kingdom of Cambodia. Since then, Cambodia has experienced tremendous economic growth and recovery, but they still have a long way to go. It is one of the poorest countries in the world with roughly 2 million people living in poverty and 40% of children are chronically malnourished.

I recently spent 10 days in Phnom Penh, the capital of Cambodia. And as you can imagine, it was a life changing trip. Dr. Patrick Vickers and I were invited there by a man with a huge heart for the poor, and who for the last 20 years has established several foundations to provide medical care for those who would otherwise have none.

All photos/videos by yours truly.

The Land of a Million Mopeds
There are 1.5 million people in Phnom Penh, and 1.3 million mopeds.
Mopeds are everywhere. And this former moped owner thinks it’s pretty awesome.
Here’s the street scene at lunchtime a few steps from my hotel. 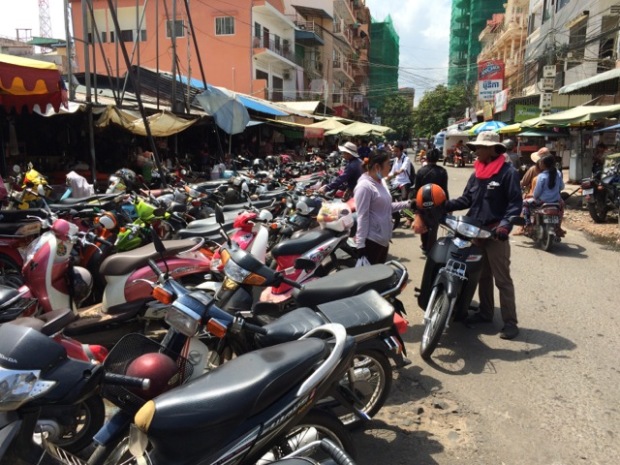 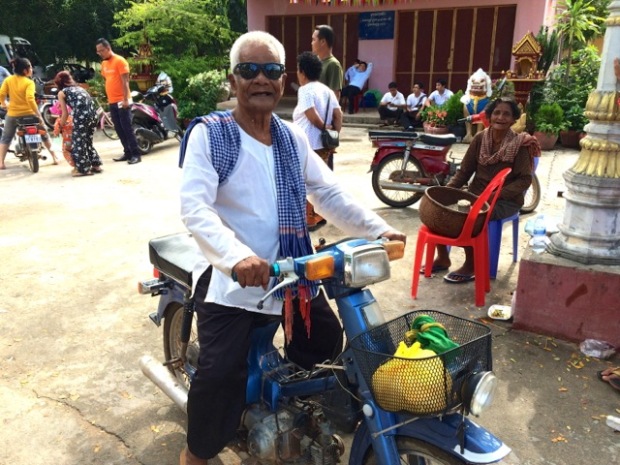 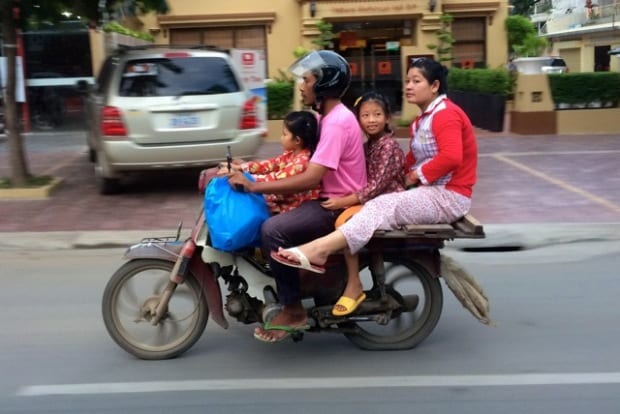 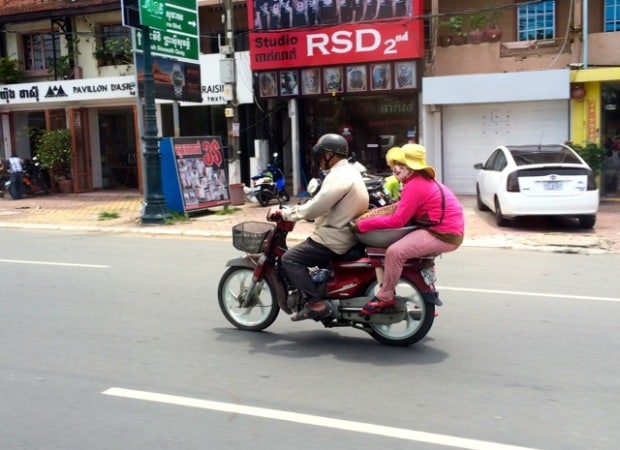 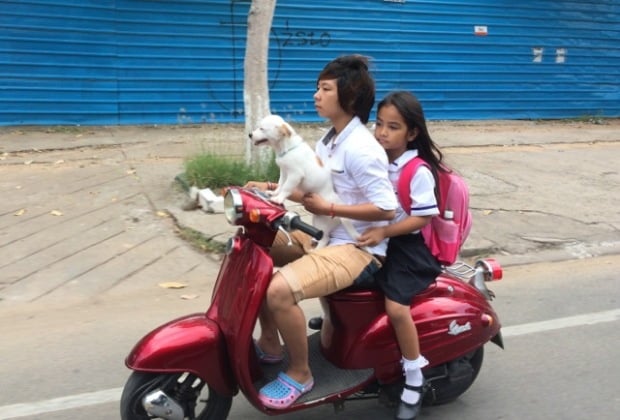 And even a moped parking garage at the new mall 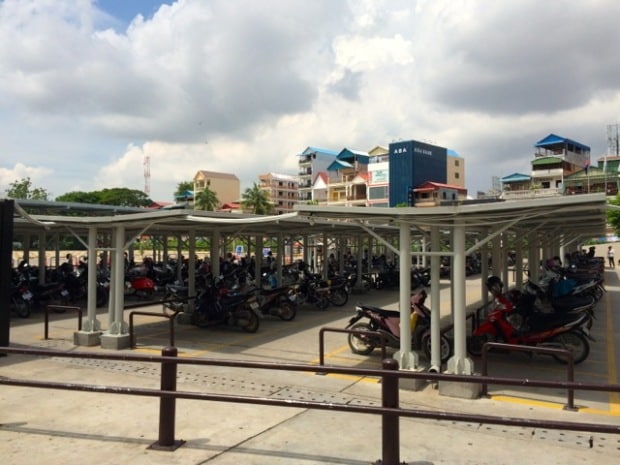 Attention Entrepreneurs: All you need to open a gas station is a steel drum and an air compressor 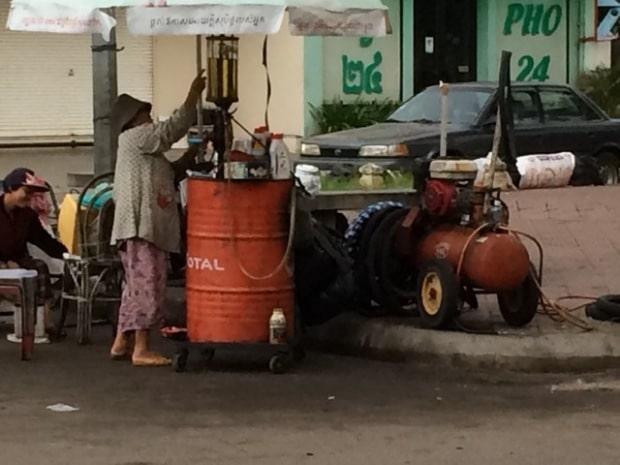 Street corner gas stations are everywhere. Many of them sell gas in recycled soda bottles. 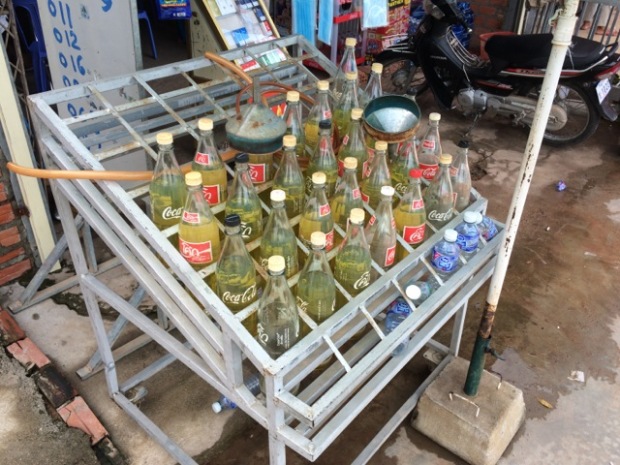 Every car in Phnom Penh is a Toyota
Ok not every car, but around 95% of them are. Camrys, Corollas, Highlanders, Land Cruisers, and Lexus SUVs abound. You’ll see what I’m talking about in the video coming up.

The default mode of transportation for tourists is the tuk-tuk
This is essentially a motorized rickshaw, a two wheeled carriage pulled by a motorcycle.
A few bucks will get you pretty much anywhere you need to go in the city.
Mr. Heng was my driver for the week. 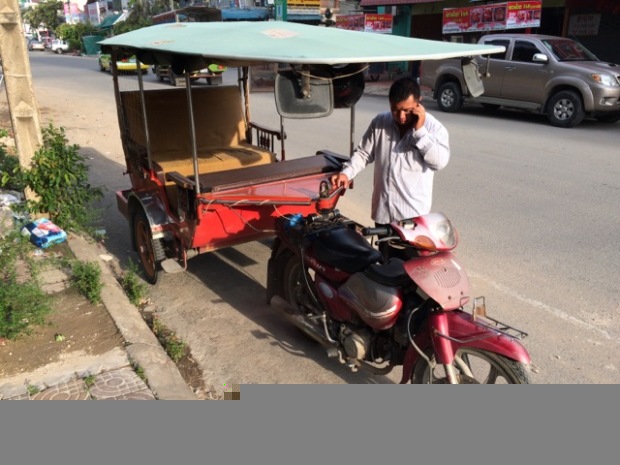 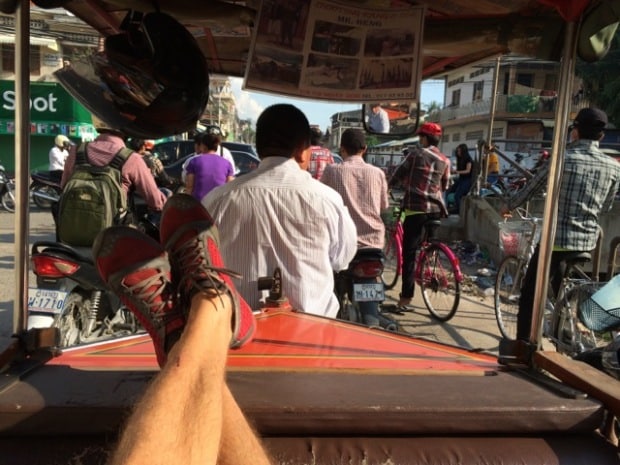 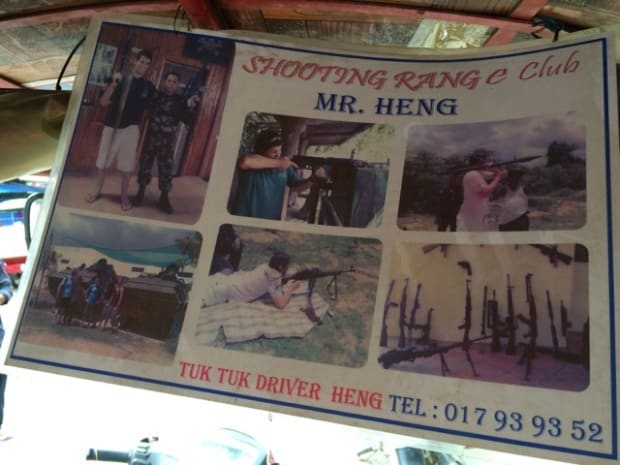 All that car and moped exhaust makes the air kinda polluted on busy streets :(
Thanks for the scarf Sean! 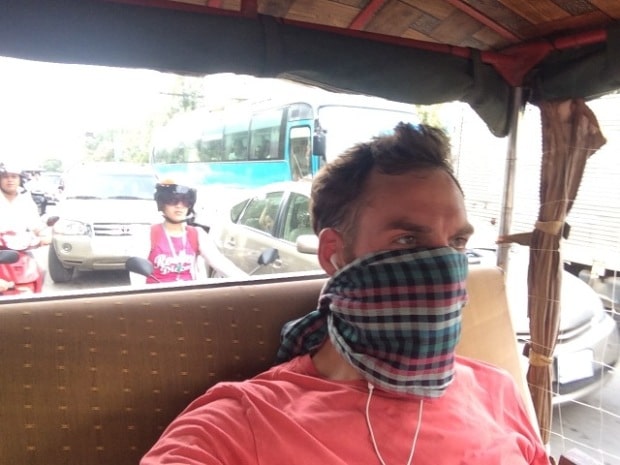 Driving in Phnom Penh is crazy
Drivers are constantly swerving between lanes, cutting each other off, turning into oncoming traffic, driving on the wrong side of the road… You know that feeling you get when you think you’re about to see a car wreck? It’s like that every 15 seconds on the road in Cambodia. And despite the total insanity on the streets, there is very little horn honking, and no one gets mad.

This is a perfect example of how expectations influence our emotions.
In the U.S. we expect everyone to drive in a safe orderly fashion, observing all traffic laws, and when someone doesn’t… ROAD RAGE. But in Cambodia, everyone expects everyone else to drive crazy, and no one appears to be surprised or upset by it. Unrealistic expectations are one of the greatest sources of disappointment and unhappiness in life. Keep your expectations low, and more often than not, you’ll be pleasantly surprised.

Most intersections don’t have stop signs or traffic lights, so it’s a total free for all
Everyone just goes. This clip raises my blood pressure every time I watch it.

If you’d like to learn how to help yourself heal or prevent cancer, you’ve come to the right place!