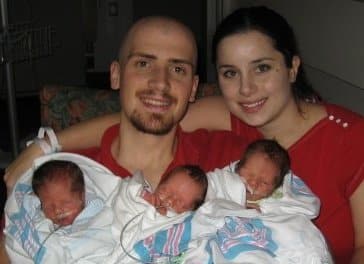 Jeffrey with his wife, newborn triplets, and cancer in 2009.

My name is Jeffrey and I had stage 3 testicular cancer. I was diagnosed Feb 25th 2009. I had my first surgery to have the cancerous testicle removed on the next day. I went to the local cancer hospital on March 3rd to confirm I was cancer free. That day I was told I had a second tumor that was roughly 7 inches by 4 inches in my abdomen. I was given 2-6 months to live. My wife was pregnant with our triplets at this time and the Dr.’s kept telling me that I was never going to see my babies be born.
I was officially cancer free April 20th 2010.

Describe your experience with conventional doctors and treatments:
My experience with conventional doctors is very eye opening. I decided immediately to not do chemo and to fight this cancer naturally. This decision was hit immediately with strong opposition from the Dr.’s. They were pressuring me to do chemo that day. They started to raise their voices and were almost yelling at me. They scheduled me to talk to another team of Dr.’s that day. I met with an oncologist and they immediately started to lecture my wife and I about how stupid our decision was. They got really mad when I explained that I am going to die with chemo or without it and I wanted to refuse chemo.

This conversation started a chain reaction. My wife and I started to receive phone calls at all times of the day and night telling us that I was going to die and chemo was my only chance of living longer. They called my wife and told her that she will be raising our triplets alone because I was killing myself.

When I was first diagnosed with the second tumor, I asked the Dr. “How do you know this is cancer with out a biopsy?” He said, “If it looks like a duck, and quacks like a duck, then it is a duck”. Is this how everyone get diagnosed or is it just me?

I was going in once a month to get CT scans to check on my progress. The Dr.’s started lying about my test results (they did not want me to know the tumor started to shrink). Once I called them out on the lying they decided to withhold my test results. (This took a phone call to the hospital administration to get resolved).

On October 31st 2009 I went in for a CT scan and an hour later I received a phone call from a new doctor who was covering for my Dr. who was out sick. She told me that the previous Dr.’s I talked to were wrong and I did not have cancer. 30 min later she calls again saying she made a mistake and I am once again dying of cancer. About 45 min after the second call I received a third call saying they have no idea what the mass is.

In November I talked to a surgeon about removing rest of the tumor. He got angry when I asked him questions (he said something that contradicted himself). He then told me he did not care if I lived or died on his operating table. After I picked my jaw back up off the floor I left. A few weeks later I received a certified letter in the mail that said that I was going to die from cancer because I refused to do chemo.

In December 2009  I saw a naturopath Dr. who said the plan I was using was fantastic. She had me incorporate fish in my diet so I could gain some weight back. (at that point I was 170lbs I started at 235lbs.) She also confirmed what I had been asking Dr’s from the beginning was if I can get my tumor biopsied. At this point all of the Dr’s I saw refused to biopsy my tumor. I started to go through the phone book and try to find a doctor who would biopsy me. I only found one Dr.

What alternative therapies did you do and which ones helped you the most?
I started off doing the Hallelujah Acres Diet, with Angstrom ionic liquid cesium and potassium, Solaray Tumeric and Essiac Tea. I added everything that I could afford that fought cancer naturally. I started jogging and lifting weights. I made sure I ate large quantities of raw broccoli, spinach, garlic and carrots. I was losing so much weight. I added wild caught fish into my diet when I started to get too thin.

What books, products, and supplements do you recommend?

I recommend to anyone that you though everything you can at cancer, attack it on every front. Cut off its food supply (sugar), take away its ideal environment (acidic blood and get plenty of exercise outside in the sun). I recommend the web site www.hacres.com this helped me get a diet plan started and it got me on the right track. I also recommend Essiac Tea. When you are fighting cancer you need to continually clean out your liver. I also recommend talking to a naturopathic Dr. I did not see mine for 9 months into my cancer battle.