Dr. Caldwell Esselstyn on How to Prevent and Reverse Heart Disease with Nutrition

Caldwell Esselstyn, Jr. M.D., was trained as a surgeon at the Cleveland Clinic and at St. George’s Hospital in London and was awarded the Bronze Star in 1968, for his service as an Army surgeon in Vietnam.

In 1995, he published his benchmark long-term nutritional research on arresting and reversing coronary artery disease in severely ill patients. That same study was updated at 12 years, and reviewed beyond twenty years in his book:

Dr. Esselstyn presently directs the cardiovascular prevention and reversal program at The Cleveland Clinic Wellness Institute. He and his wife, Ann Crile Esselstyn, have followed a plant-based diet for more than 26 years. You may also know him from the film Forks Over Knives…

Unlike the “how to prevent heart disease” claims of many well-known doctors and experts, Dr. Esselsytn actually proved which diet stops and reverses heart disease in a clinical study of 177  patients with advanced heart disease. What a concept!

If you or anyone you know has a history of high blood pressure, high cholesterol, or heart disease, or if you want to prevent it, definitely watch this interview!

Show Notes:
-Why heart disease is virtually non-existent in other cultures around the world. [1:39]
-Why physicians don’t give their patients nutritional advice [4:39]
-5 components of the Western diet that cause heart disease [7:33]
-Finding the truth in all the diet fads  [9:28]
-Rock-solid science that shows how to reverse cardiovascular disease [12:37]
-Dr. Esselstyn’s perspective on cholesterol [25:05]
-How we can annihilate 75% of chronic illness and cause a health revolution [32:30] 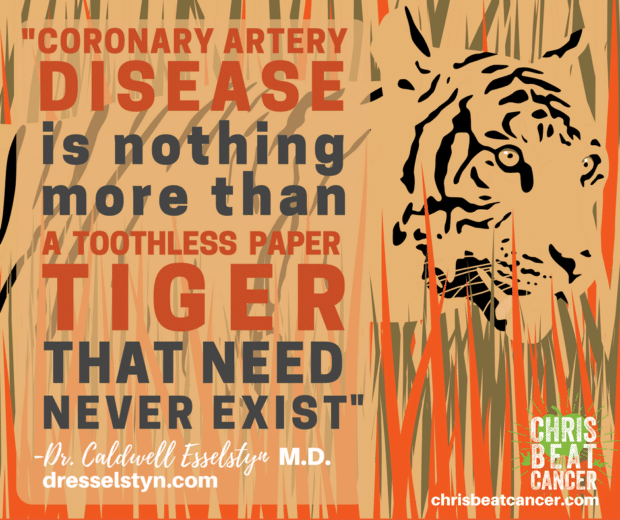 Read his study: A Way to Reverse CAD?