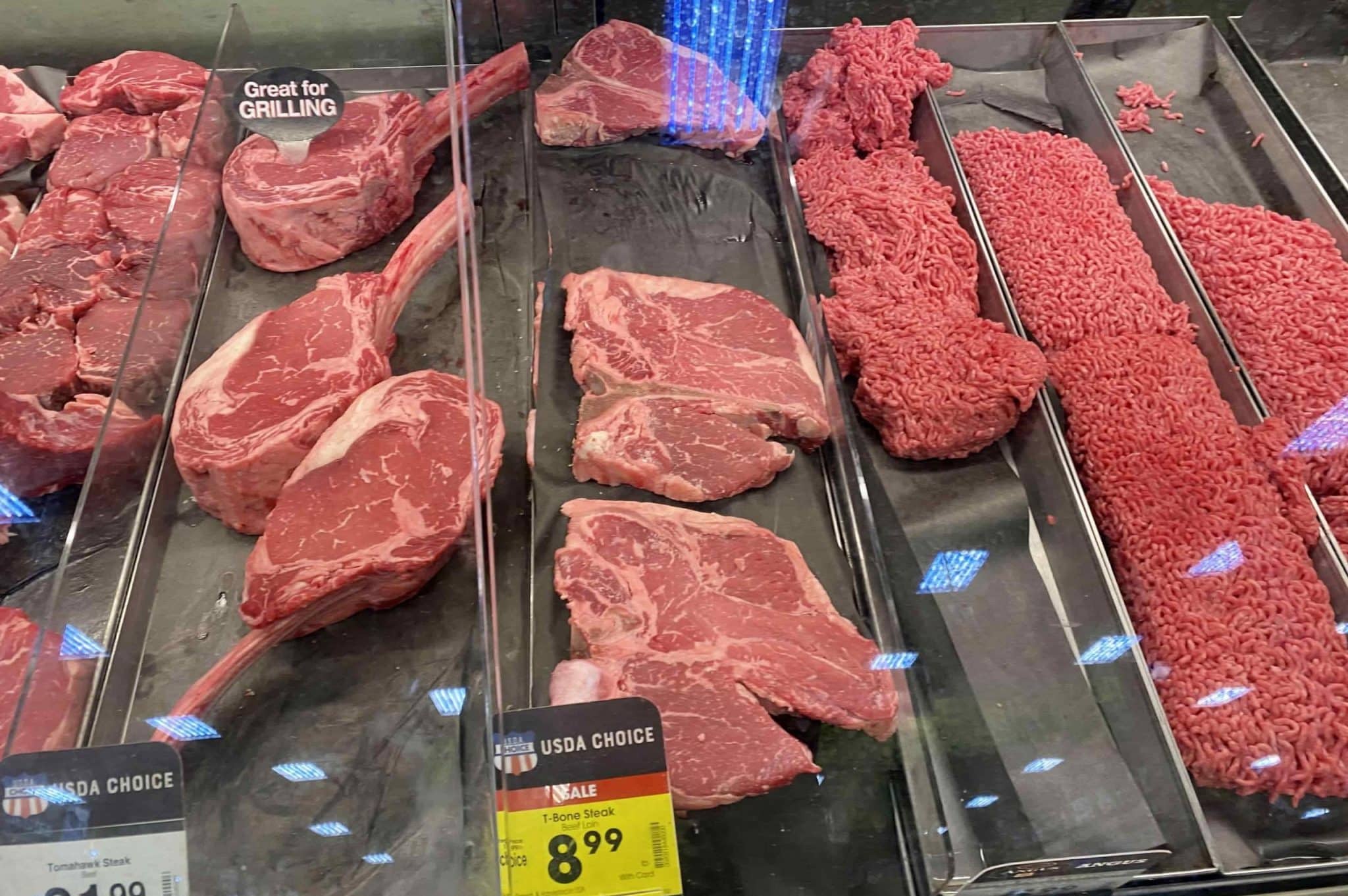 The dietary advice given to cancer patients is at best painfully ignorant and at worst potentially deadly.

Cancer patients are routinely told by their doctors and nutritionists to eat whatever they want, and often sent home with suggestions to consume high-calorie junk food like ice cream and milkshakes. In addition, there are a number of cancer diet books with meat-based recipes despite countless published studies demonstrating how eating animal products (meat, dairy, eggs) can cause and promote cancer growth.

This article is not meant to be a definitive and exhaustive treatise on the subject, just a quick reference to help you understand the basics.

Let’s start with the cancer causers.

In 2015, after reviewing 800 scientific studies, the International Agency for Research on Cancer (IARC) classified processed meats including bacon, sausage, ham, hot dogs, deli meats, corned beef, canned meat, and jerky as Group 1 carcinogens (Source, Source). That means there is sufficient evidence that these foods directly cause colorectal cancer, and may also cause stomach cancer. Eating just 1.75 ounces (50 grams) of processed meat each day—that’s about two strips of bacon—increases your risk of colorectal cancer by 18 percent (Source).  And your risk increases with the amount of meat consumed.

Red meat (beef, pork, lamb, etc.) is classified as a Group 2A carcinogen, which means the current body of evidence indicates that it is a probable cause of cancer. A separate meta-analysis associated the consumption of red meat and processed meat with an increased risk of colorectal, esophageal, liver, lung, and pancreatic cancers (Source).

Another notable study found that middle-aged Americans ages 50 to 65 who reported eating a high-protein diet with more than 20 percent of calories coming from animal protein were four times more likely to die of cancer or diabetes and twice as likely to die of any other cause over the next 18 years. But those who ate a plant-based diet did not have any increase in risk (Source).

In addition to processed meat and red meat being potential cancer causers, here are seven ways animal products can contribute to cancer growth.

Cholesterol
Dietary cholesterol has been associated with an increased risk of many cancers including stomach, colorectal, breast, lung, pancreatic, kidney, bladder and non-Hodgkin’s lymphoma. Cholesterol metabolites support cancer progression and suppress immune responses. Studies have shown that manipulating cholesterol metabolism inhibits tumor growth, reshapes the immunological landscape and reinvigorates anti-tumor immune function (Source). Cholesterol is not found in plant food, only in animal food, and eggs are the highest source. The simplest way to eliminate excess cancer-fueling, immune-suppressing cholesterol in your body is to stop eating animal food. Your liver makes all the cholesterol your body needs.

IGF-1
Insulin-like growth factor-1 (IGF-1) is a growth hormone directly linked to uncontrolled cancer growth. Elevated levels of IGF-1 can promote cancer in humans, specifically breast, prostate, pancreatic and colon cancer (Source). IGF-1 levels increase in your body when you eat animal protein and/or refined sugar. One remarkable study found that after just 12 days on a whole-foods plant-based diet plus daily exercise, the blood of breast cancer patients was found to have significantly lower levels of IGF-1 and increased cancer stopping power (Source).

Methionine
Many human cancer cells, including colorectal, breast, ovarian, melanoma, and even leukemia, are dependent on an amino acid called methionine, which is one of nine amino acids not made by the body (Source, Source). Fruits contain little to no methionine. Vegetables, nuts, and whole grains have small amounts. Beans have the most methionine in the plant kingdom, however, milk, eggs, and red meat have over twice the methionine as beans. Chicken and fish have five to seven times more. The easiest way to keep your methionine levels low and deprive cancer cells of this essential amino acid is to eat little to no animal food.

Heme Iron
Heme iron is a highly absorbable form of iron found in meat—especially red meat, organ meat, and shellfish—but not found in plant food. In small amounts, iron is good for you and necessary for the formation of healthy blood cells, but excess iron causes oxidative stress, DNA damage and can catalyze formation of cancer-causing N-nitroso compounds. Excess dietary iron has been linked to an increased risk of esophageal, stomach, colorectal and breast cancer (Source, Source, Source). Excess iron accumulates in your liver, heart, and pancreas eventually resulting in iron toxicity because your body has no way of ridding itself of excess iron except through blood loss. Non-heme iron is a much safer form of iron found in plant foods, especially in legumes, sesame seeds, pumpkin seeds, spinach, Swiss chard, quinoa, and dried apricots.

Neu5Gc
N-glycolylneuriminic acid (Neu5Gc) is a unique sugar molecule found only in animal food, especially red meat, organ meat and some dairy products, which increases the risk of tumor formation in humans. Neu5Gc does not occur in humans and your immune system treats this molecule as a foreign invader and produces antibodies in response to it, which increase inflammation in your body. Neu5Gc has been associated with inflammatory diseases including cancer, cardiovascular disease and some bacterial infections (Source, Source).

One large study found that people with the highest consumption of meat cooked at high temperatures had a 70 percent greater risk of pancreatic cancer compared to those with the lowest consumption of well-done meats (Source). Fried bacon and fried fish have the highest concentrations of HCAs and PACs, about five times more than beef and chicken. Interestingly, chicken cooked without the skin has been found to have twice the levels of mutagens as chicken cooked with the skin on.

Haven’t humans been eating animals for thousands of years?
Yes, but not at the excessive levels we do today. Thanks to factory farming, we are eating meat and dairy at every meal. This seems normal, but it is unprecedented in human history, as are our rates of chronic diseases like cancer, heart disease, and diabetes. There are still many parts of the world where cancer rates are very low. For example, the rate of colon cancer is 50 times lower in native Africans than in African Americans. Researchers credit the native Africans’ extraordinarily low rates of colon cancer to an absence of “aggressive dietary factors,” namely animal protein and fat (Source).

What about grass-fed, organic, wild meats?
When it comes to eating animal products, think in terms of quality and quantity. I suggest high quality, low quantity. According to the National Geographic Blue Zones Project, the healthiest longest-living people groups around the world eat 95% plant-based on average. This equates to eating animal products somewhere between a few times per week to a few times per month. That is considered to be a safe level of consumption for prevention of many chronic dietary diseases.

If you are trying to heal active cancer, I suggest applying the precautionary principle and drastically reducing your consumption of animal products as well as processed foods to zero or near zero. Think in terms of risk reduction. When you reduce or eliminate the animal products in your diet and replace them with whole plant foods from the earth, you not only reduce the levels of cancer causers and cancer promoters found in animal food, but you also increase the levels of thousands of anticancer compounds found only in plant food. That’s why a whole food plant-based diet (preferably organic) is the optimal anticancer diet.

I created a coaching program called SQUARE ONE to teach you exactly how I and many others have healed cancer against the odds with evidence-based anticancer nutrition and natural non-toxic therapies.  If you are serious about healing or prevention, this course is for you. Learn more about the SQUARE ONE Program here.
…