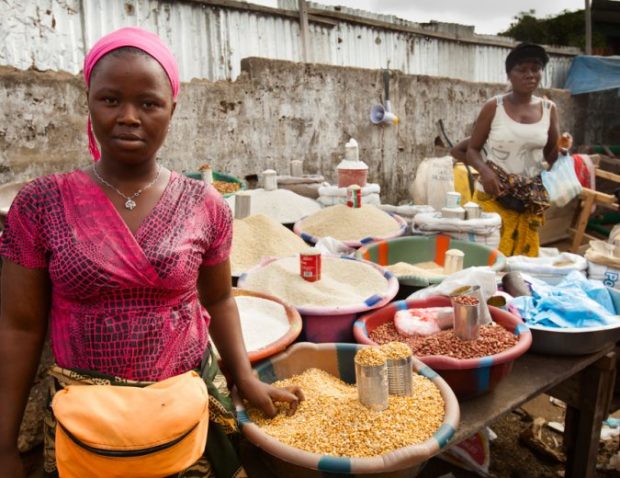 Colon cancer is the second leading cause of cancer death in the U.S. And rates of colon cancer are much higher in Western countries (Europe, Canada, the U.S. and Australia) than in Africa or the Far East.

For decades, researchers like Dr. Denis Burkitt have postulated that Western diets, high in animal protein and fat but low in fiber, raise colon cancer risk compared with African diets, which are high in whole food carbohydrates, resistant starch and fiber, and low in fat, protein and oils.

A fascinating 2015 study, nicknamed The African Diet Swap, and published in Nature Communications, confirmed that a high-carb, high-fiber diet like that of the rural Africans can substantially reduce colon cancer risk. The study also demonstrated that your microbiome (bacteria living in your gut) plays an important role in this anti-cancer effect.

An international team of scientists from the Imperial College London and the University of Pittsburgh carried out the study with two groups: 20 African Americans from Pittsburgh and 20 rural South Africans from KwaZulu-Natal. The two groups of middle-aged adults swapped diets under tightly controlled conditions for two weeks.

All members of the study had colonoscopy examinations before and after the diet swap. The researchers also measured biological markers that indicate colon cancer risk and studied samples of bacteria taken from the colon.

At the beginning of the study, almost half of the American subjects had polyps — abnormal growths in the colon that can progress to cancer. None of the Africans had them.

For the first two weeks, each group ate their normal diet:

Then they swapped diets for two weeks. The African Americans were given ‘African style’ foods which increased their average fiber intake from 14 to 55 g per day and reduced their fat from 35% to 16% of total calories.

An example of one days diet swap for the African Americans: Hi-Maize corn fritters, salmon croquettes with spinach, red pepper and onions for breakfast, veggie corn dogs, tater tots and mangos for lunch, and Hi-Maize with okra and tomatoes, Hi-Maize corn muffins, Black-eyed peas, pineapple and black tea for dinner (Meat 0-1 time per day). Hi-Maize is a type of corn meal.

The rural Africans were fed a ‘Western-style’ diet with higher amounts of animal protein, reduced fiber from 66 to 12 g per day and increased fat from 16% to 52% of total calories.

An example of one days diet swap for the rural Africans: Pancakes and sausage for breakfast, a hamburger for lunch, and meatloaf with rice for dinner (Meat 3 times per day).

Professor Jeremy Nicholson, the team leader from the Department of Surgery and Cancer at Imperial College London, said:

“The findings suggest that people can substantially lower their risk of colon cancer by eating more fiber. This is not new in itself, but what is really surprising is how quickly and dramatically the risk markers can switch in both groups following diet change. These findings also raise serious concerns that the progressive westernization of African communities may lead to the emergence of colon cancer as a major health issue.”

Professor Stephen O’Keefe at the University of Pittsburgh, who directed the study, said: “Studies on Japanese migrants to Hawaii have shown that it takes one generation of westernization to change their low incidence of colon cancer to the high rates observed in native Hawaiians. Our study suggests that westernization of the diet induces changes in biomarkers of colon cancer risk in the colonic mucosa within two weeks. Perhaps even more importantly, a change in diet from a westernized composition to a ‘traditional African’ high-fiber low-fat diet reduced these biomarkers of cancer risk within two weeks, indicating that it is likely never too late to change your diet to change your risk of colon cancer.”

The study found that a major reason for the changes in cancer risk was the way in which the bacteria in the gut (the microbiome) altered their metabolism to adapt to the new diet. In the American group, the researchers found that the African diet led to a 250% increase in the production of butyrate, a byproduct of fiber metabolism that has important anti-cancer effects. The Western/American diet cut butyrate production in half.

More interesting facts from the study

Each rural African community has about 5 acres of land, which supports small seasonal vegetable gardens that grow limited supplies of corn, pumpkins, watermelons, spinach and papayas, and a variety of animals, chickens, goats, and maybe a few cattle. Cattle are considered a sign of wealth and are used for milk and only slaughtered on ceremonial occasions.

Milk products are consumed, but rarely fresh. Milk is left outside the huts to ferment, and then consumed with relish as ‘maas’. Eggs are also eaten when available, but meat in any form is scarce and generally added as flavouring rather than forming the signature component.

Foods are generally boiled, not fried, and cooked in cast iron pots on open wood fires in a separate hut. Electricity is becoming more available, but is still very rudimentary and unreliable. The diet consists chiefly of ‘putu’, a stiff porridge made from refined commercial corn flour called ‘mielie meal’, with salt and vegetables added for flavouring. It is eaten communally, and forms the bulk of the 2-3 meals consumed each day. Water is usually obtained from community wells, but also from the rivers.

Traditional African foods provided on the menus for the African Americans included Phutu and Samp & Beans. Phutu, a porridge made from Hi-Maize corn meal, is high in resistant starch. Samp is dried corn kernels and the beans used were sugar beans. The Phutu was provided every other day and the Samp & Beans were provided daily. The vegetables provided included sweet and white potatoes, cabbage, and Swiss chard.

Phutu was cooked by adding it slowly to boiling water stirring constantly to prevent lumps. Buttermilk was also added to the recipe. The Phutu continued to simmer in a pot on low heat for one hour. The Samp & Beans were soaked overnight in water. First the beans were boiled for an hour in water and then the Samp was added. The Samp & Beans cooked for another hour before adding other ingredients (onion, tomato, curry, salt, pepper). Once all the ingredients were added, the Samp & Beans cooked on low heat in a covered pot for an additional four hours. The chicken and fish were baked in the oven. Eggs were either hard cooked or fried in a small amount of sunflower oil. The cabbage was sautéed in oil with onions and spices. The Swiss chard was cooked with beet stems. Other foods like potatoes and rice were boiled.

Key Takeaways
-Colon cancer is the 2nd leading cause of cancer death in Western nations, and it’s largely caused by diet.
-The rural Africans have very low rates of colon cancer because they don’t eat a Western diet.
-The whole food plant-based diet of the rural Africans is high-carb (>70%), high-starch, high-fiber, and very low in animal protein and fat, but not strict vegetarian or vegan. And they don’t have an obesity problem.
-After just two weeks on a whole food plant-based diet with lots of starches (rice, beans, peas, lentils, potatoes, corn, etc.) there is a dramatic shift in your microbiome and reduction of multiple colon cancer risk factors.

FYI: The way I eat now (and have for many years) is very close to this, about 65% whole food carbs, 23% fat (from nuts and seeds), and 12% protein from plant sources. I only eat meat and/or dairy products a few times per month.

Some additional (and vital) health benefits to the rural African way of life is lots of fresh air, sunshine, exercise, and much lower stress. I strongly suggest you incorporate these things as well.

If you’ve never tried African food, I suggest finding a local Ethiopian restaurant ASAP! The meals are served in large portions, meant to be shared, and consist of a variety of greens, beans, peas, lentils, beets, carrots, and cabbage as shown below. You eat with your hands using my favorite type of bread in the world, a spongey sourdough pancake bread made from teff called injera. 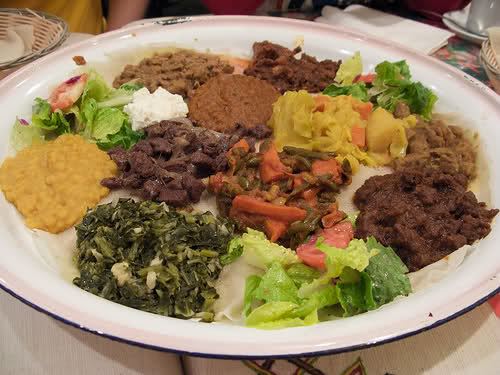 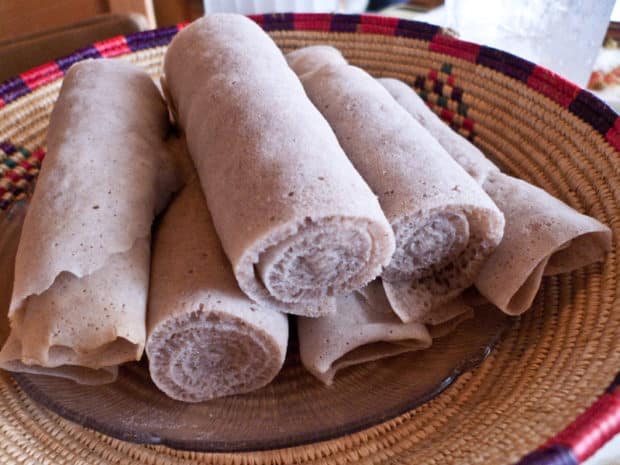 It may not look that appetizing, but trust me, it’s delicious!